The Prehistoric Wonders of Occitania 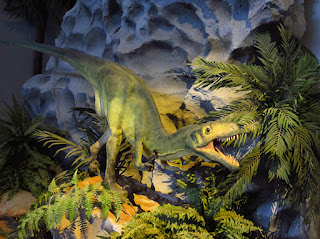 This mountainous region of Occitania in the deep south of France is very ancient. Many millions of years ago, this part of the world was the realm of dinosaurs and many other prehistoric creatures that are now extinct.
Some of their remains have been found in the Aude Valley, well preserved in the soil, only to be discovered by a French geologist at the end of the 19th century. 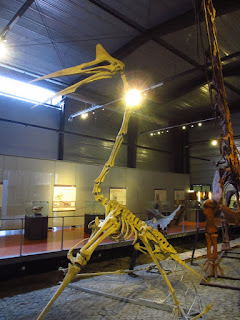 The Dinosaur Museum in Esperaza offers a real journey back in time to the origins of life on Earth almost 3.5 billion years ago; a showcase of biodiversity through the great geological periods. It is aimed at all generations: from the youngest who meet their favorite dinosaurs, to the adults immersed in the heart of this long history of life on Earth. The museum opened in June 1992, three kilometers from the largest French dinosaur deposit. Since 2007, and after some work, it now offers a permanent exhibition area dedicated to dinosaurs and other fossils of reptiles, mammals, invertebrates and plants found around the globe.

The Dinosaur Museum is managed by the DINOSAURIA Association (non-profit). Website: www.dinosauria.org 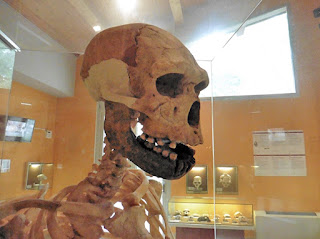 Throughout the millennia, the weather and the environment changed. The landscape was ground out by ice and water, creating valleys and ridges, and fast flowing, giant rivers carved out deep caves. About 950.000 years ago, the first human immigrants from Africa arrived on the Iberian peninsula. They only left us their tools to find, until in July 1971, after 7 years of methodical excavations, Professor Henry de Lumley's team discovered a skull 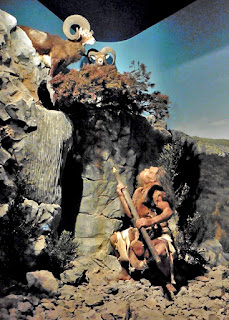 (one face and one frontal) in a cave near Tautavel. This cave at Tautavel is one of the largest prehistoric deposits in the world. Since then, annual excavations have revealed more than 100 other human fossils (visible at the Tautavel Prehistory Museum). These remains made it possible to reconstruct the life and the environment of these groups of Homo erectus and suggest that this place was frequented by nomadic hunters who lived there between 690.000 and 300.000 years ago. Some 600.000 years of climatic variations have also been archived. The activities of the excavation site are managed by the European Center for Prehistoric Research. Being about 20 years old, the man of Tautavel was 1 m 60 (ca. 5 ft 3 inches) tall. This Homo erectus had all the characteristics of the first Europeans. 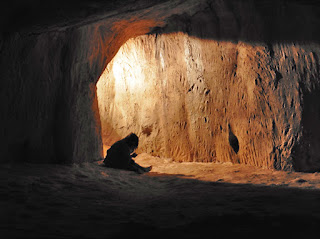 Although he did not master fire just yet, he turned out to be an excellent hunter. One might think that he would have chosen the site of the Caune de l'Arago for his privileged situation, for here he could dominate the valley, its source of water, and therefore his prey.

Visit the Prehistoric Museum at Tautavel and dive back into this incredible history!
Website: www.tautavel.com. 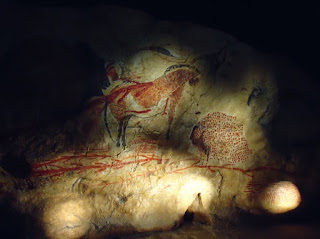 Also the Neanderthal people were here around 100.000 years ago, and finally, between 60.000 and 30.000 years ago, the Cro-Magnon people appeared. They were the ancestors of the modern Europeans and are known for their (cave) art and advanced hunting techniques. At the Prehistoric Museum in Tarascon-sur-Ariège, one travels back in time to a world that was still very empty; with nature ruling the planet; with mighty rivers and long winters, and with migrating herds of bison. While people stayed in caves during the winter months, working together with other clans to survive, they built summer camps in the valley, where they slept in tents like yurts and wigwams. 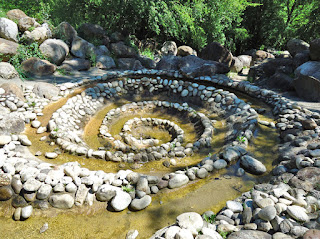 In that same period, symbolism appeared, e.g. circles and dots; a language perhaps? Sometimes we see phallic symbolism. The first Venus figurines (e.g. the Dame de Brassempouy, ca 25.000 years old) and handprints on cave walls appeared around the same time as the cave paintings, as well as incredibly fine artwork (made of e.g. ivory, bone and antlers) and there is evidence of travel. Similar objects and symbols have been found throughout a vast territory, giving the idea of traveling, intermingling, perhaps even trade among the various clans in southern and central France. This was the era of the fire makers, for to enter the 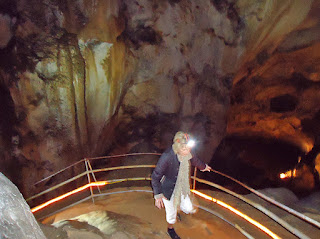 deeper parts of a cave one needs light. Only when humankind had found out how to create and contain fire, they could go further into a cave and sense the silence, the sacredness, and the idea of being in the belly of the Mother Goddess. That dark, quiet space became their first cathedral. A holy place where shamans used the cave walls to create their sacred art. Today we can visit several prehistoric caves in Occitania, such as Lombrives (photo), Niaux with its original cave paintings, and Bedeilhac, which is particularly sacred and special, for it contains both paintings and symbols. This underground realm is very ancient with its giant halls and thick columns, and one can only speculate how long ago it was, when those first brave souls finally dared to enter this sacred space, holding onto a torch which, after all, only has a flickering, temporary flame...