Take the Time to Smell the Roses of Camon 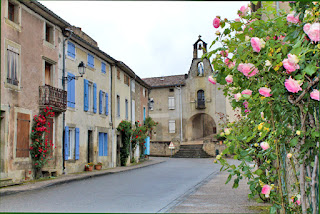 When driving through the borderlands of the Ariège and Aude districts, you may come upon a charming little village called Camon.

In Gallo-Roman times, the meander, formed by the river Hers, was an ideal spot for a fort. It was called "Cambo Dunum", meaning: 'Fortress of the Meander". 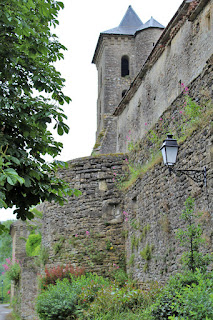 In 778, Charlemagne, ruler of the Holy Roman Empire, was on his way back from Spain to Germany, when he ordered the construction of many abbeys, chapels and convents in these parts. It is said he himself founded the abbey of Camon in 778. For sure, we can say that the abbey already existed in the year 923, as it is mentioned in an act. The abbey was following the very popular rule of St. Benedict. 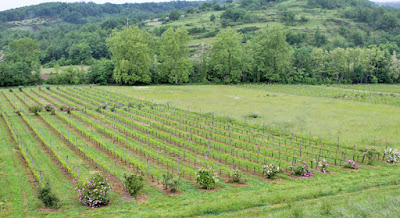 Rose hedges were often planted as an early warning system to protect the well being of the grapevines, because early detection of disease on the roses could alert winemakers to take necessary action to protect the vines from damage. Roses also provide food for bees and offer habitat for beneficial insects preying on those other insects that can damage the grape. Also in Camon this ancient method is still used. 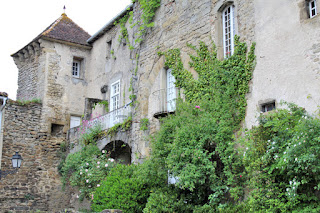 Camon was a productive and happy little village, but on June 18th, 1279, disaster struck when the dam that was holding Puivert Lake broke, and the entire region flooded. Along with all the other villages in the area, Camon was very badly damaged. The villages and fortresses were rebuilt between 1280 and 1316, adapting to the architectural fashions of that period. 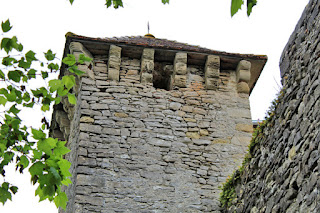 A crenelated enclosure was erected around the abbey of Camon during the 100 year war between England and France, which actually lasted 116 years (1337 to 1453). But even this new protection was not enough to keep the abbey and the village of Camon safe, for in 1494, the church and abbey were almost destroyed by highwaymen, who set fire to Camon. 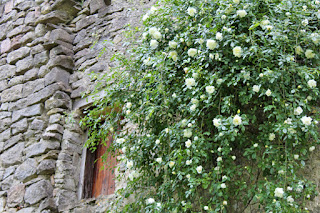 For 8 years the village was all but deserted; even the monks had abandoned Camon Abbey. Fortunately, Philippe de Lévis, Bishop of Mirepoix, decided to rebuild the village (1503-1535). Most of the town we see today dates from this period, but when you walk around the ancient walls of the old abbey buildings, you can spot some of the ancient walls and fragments of buildings from a much older period, perhaps even the remains of the late Carolingian era, creating an almost unreal, enchanting atmosphere. 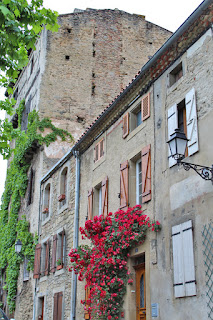 Philippe de Lévis decided to live in the large rectangular tower, now called 'the castle', and secured the safety of all the villagers of Camon by building a large, stone wall around the village.

Between 1560 and 1570, Cardinal Georges d'Armagnac, then prior of Camon, strengthened these fortifications, enlarged the battlements and drilled loopholes. The Cardinal also created a small round tower at the west corner of the village wall. All these measures were taken to protect themselves against the hatred and violence during the Religious Wars (1562–98), an epic battle between Roman Catholics and Protestants that raged throughout Europe. Because of this horrible and violent period, many towns and villages in southern France were forced to create extra fortifications to keep its inhabitants safe. 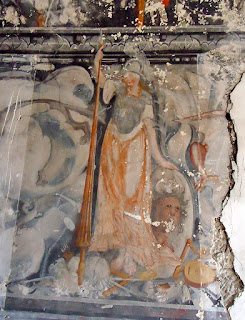 During the 17th and 18th centuries, the priors who were living at Camon Abbey added many elements of decoration and wealth to the abbey and the church. This symbolic Athena mural with the 'John Gesture' of Divine inspiration, probably Freemason, dates from this period.
In these 200 years, Camon blossomed economically and its population grew to 860 inhabitants.
However, when the French Revolution happened and Church and State were separated here in France, the monks abandoned the abbey without any resistance.
In 1791, the abbey was sold as a national property, and today it is still privately owned and kept in a wonderful state as a luxury Chambres D'Hôtes, restaurant & wedding venue (www.chateaudecamon.com). 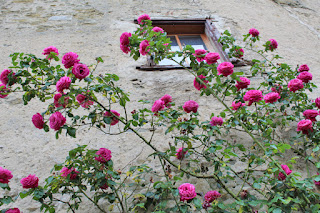 Nowadays, the village of Camon is especially popular during the Spring and early Summer months, when the roses are in bloom. Not having a proper front garden, people started to grow climbing roses right in front of their houses. People come from all over the world to enjoy the roses of Camon during the annual Rose Festival (late May or early June, depending on the weather). 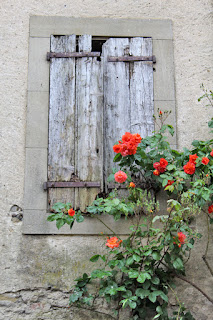 It was on a wet Spring day that I had the chance to walk around the village of Camon and take a few photos of the roses, which are now in full bloom. The air was pregnant with the gorgeous smells of old roses and wet earth.

The countryside is so green that it almost hurts your eyes. This is a very wet Spring indeed and you can see that the roses have grown very fast. Long branches, weighed down by heavy, rain-soaked flowers, are bending over deeply, almost breaking. Being a lover of roses all sorts, I have been tying up my own rose bushes at home to save them from the effects of the wind and rain.
Other roses with smaller flowers are courageously reaching for the skies; they can keep themselves upright. It is amazing to witness how even the roses that are drooping and hanging down are magnificent in their presence, colour and grace.
A wise lesson in accepting circumstance, whatever the proverbial weather. 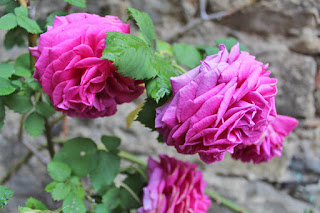 Halfway through the village it started to rain again. After the drought and heatwaves of 2017, the wet Winter and Spring is so very beneficial for nature, and it is obvious that also the roses enjoy the abundance of water. The tourists I met didn't seem to mind the weather much, for they walked up and down the picturesque streets, photographing one rose after the other. I covered my camera with my scarf, but refused to go back to the car just yet. 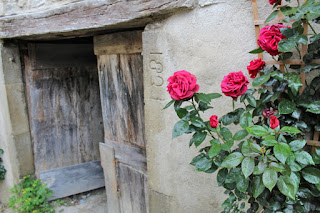 The best way to discover the streets of Camon is to just get lost. Go around a corner; if it's a dead end you won't have to walk far to get back to where you came from. Half-timbered houses are hidden in alleys and the closer you get to the abbey, the older the buildings. Explore the area behind the town, where it ends, and where the fields begin. 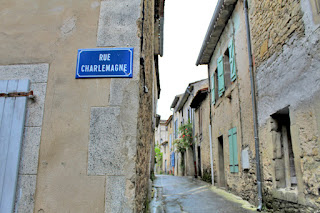 Walking back to the car park I passed the Rue Charlemagne, remembering the amazing story of this legendary ruler of Europe, who was crowned Emperor of the Holy Roman Empire in Germany in the year 800. His empire was huge, and he and his ancestors tried to keep Europe from being overrun by the growing Arab Empire, which had already spread to Spain and the Pyrenees in the 8th century. There are many heroic stories about Charlemagne and his Frankish military leader, Roland, fighting the Moors and pushing them back over the Pyrenees, but Charlemagne was also a man of honour and it must not be forgotten that he often tried to solve matters by debate, rather than force. 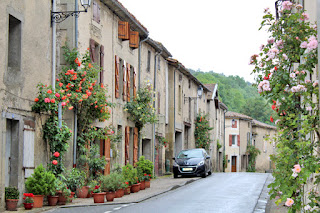 Back in the main street, and happy to have taken the time to smell the roses of Camon. So, next time when you head out towards Chalabre and Mirepoix, do not forget to stop briefly in the village of Camon with its rich history and gorgeous roses. Get lost. Walk around the abbey and stroll through the medieval streets. Give yourself an hour, and do not forget your camera.